After a snowstorm, we are first on the trails before we even see the snow resurfacing machine. I can’t count the number of times my friends and I have been stuck in the snow with our snowmobiles. Not to mention the number of times we’ve helped other snowmobilers. One of the best methods to get out of trouble is to clear the front of the snowmobile and then pull on the skis while someone gently presses the accelerator. That’s precisely what the StuckMate is for. The StuckMate is a tool to control the throttle remotely and allow us to pull on a front ski of the snowmobile at the same time. Previously, a minimum of two people was required to do this. The advantage of the StuckMate is that you can now get out of this situation by yourself, although it is always easier when you are not alone. So, this is what this tool is all about. 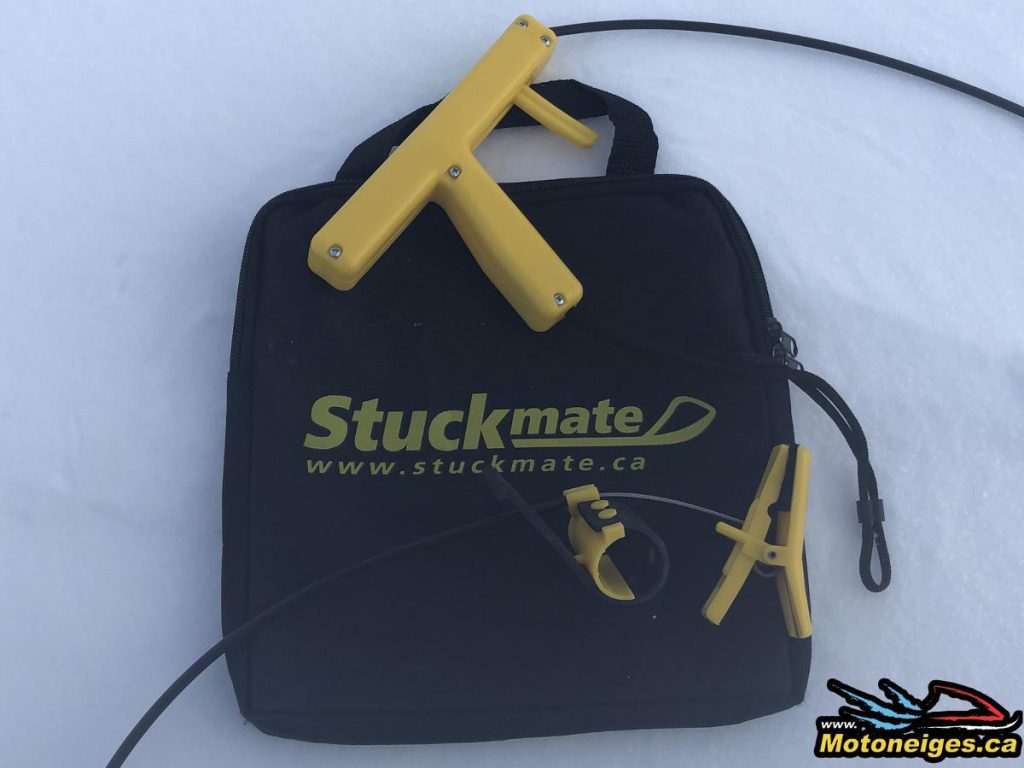 First, let’s note the quality of the StuckMate, it’s beyond impeccable, and the instructions are well detailed. Besides, they’re plasticized, which is a good idea. The tool is made of plastic, only the metal cable attached to the handlebar is not protected, but the visible part of the cable is very short. 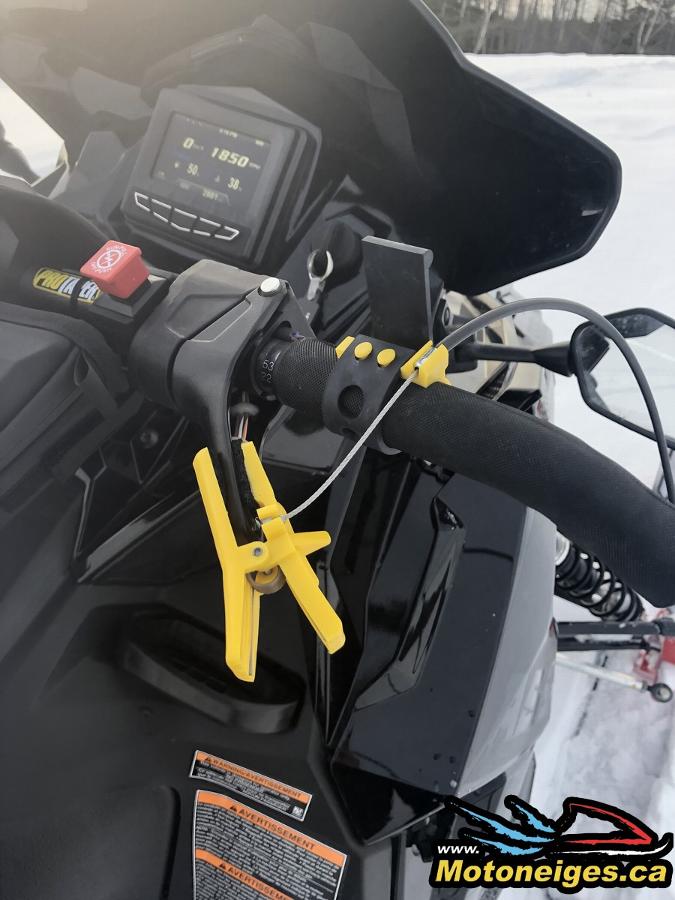 I suspect that the instructions may take longer to read than to install the StuckMate. Even the first time, the installation is intuitive and took me only a few minutes, including the time I took to get the tool out of its bag. The handlebar strap and the accelerator clip must be positioned appropriately to ensure that the metal cable is not too tight. It is essential to put the rope around your arm that is attached to the accelerator. If the accelerator remains engaged, the mechanism is designed to come apart. We need to test that the mechanism works well before starting the snowmobile and reposition the mechanism if necessary.

The joystick allowed me to operate the accelerator while I was pulling the ski. The system is straightforward to use and kept a good control of the snowmobile’s accelerator. I think this is important when you’re stuck because you don’t have to press the throttle hard to avoid getting stuck again. In some situations, with my windshield, I would have liked the cable to be just a little longer, especially when you must pull on the ski from the left side. It is important to make sure not to put the StuckMate back in the bag full of snow so that the metal cable does not rust. I also suggest drying it after use to ensure better longevity.

Since I was in a field, I took the time to test that the mechanism could remove itself if the accelerator ever remained engaged. The metal cable completely pulls out of the mechanism, and only the clip stays on the handle. It is very easy to put the wire back in the right position. 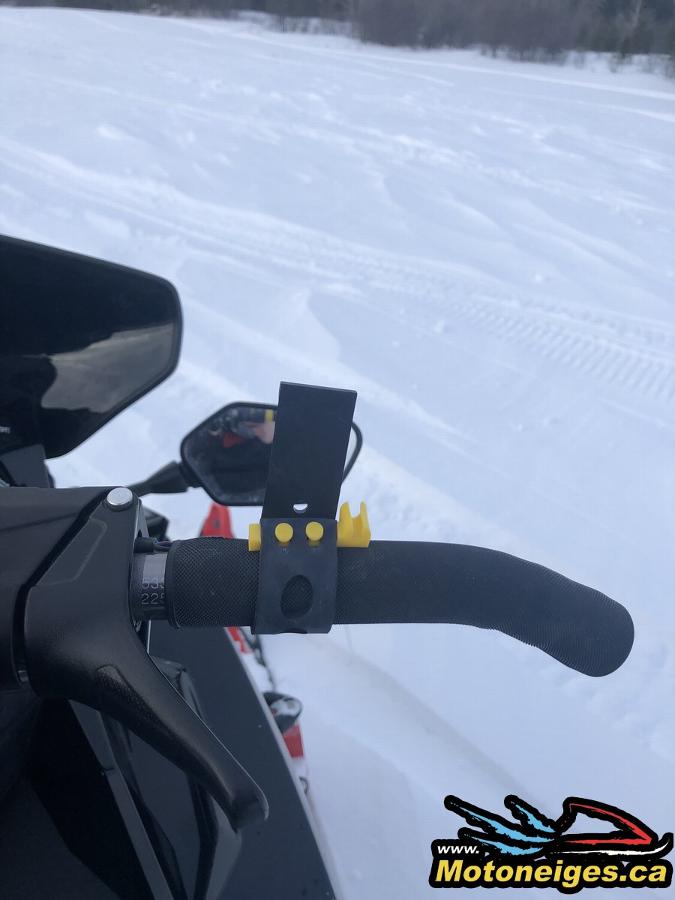 The StuckMate works well. It is safe when used correctly. In addition to being compact and lightweight, it is easy to store. A beautiful Canadian invention. This item is now part of my list of essential emergency equipment. It will certainly help me a lot this season. Thanks to Kimpex and SledMagazine.com for this test.

“Any rider who’s ever been stuck in deep snow knows what a chore it is to get out. After tramping down the snow in front of the sled as much as possible, it usually takes a strong pull on the skis coordinated with steady throttle to extricate. This is very problematic if you’re alone and can even be difficult with only one companion to assist. But what if you could accelerate and pull on a ski at the same time?

Stuckmate is a safety device that makes this happen. Invented by a Canadian snowmobiler, Stuckmate gives you an extra helping hand when you need it most. Basically, it’s a handlebar-mounted, spring-loaded clip that affixes to your throttle lever. It operates via a 6-foot cable controlled by a handheld trigger device. Squeeze the trigger gently and Stuckmate engages the throttle while you’re standing to the side and pulling on the ski.

With a universal design that fits all makes of snowmobiles, the bright yellow Stuckmate is incredibly light and packs away in its own small storage pouch that’s always easy to carry with you. It’s also easy to install, to operate, and it works as advertised – just be sure to follow the instructions carefully…

So the next time you get stuck in the snow and before you work up a serious sweat lugging your guts out, give Stuckmate a try – it’s the smart way to get back on top of the snow where you belong!”

As reviewed by Craig Nicholson
http://www.snowgoercanada.com/tourism/intrepid-tours/836-snow-time-in-sundridge

“STUCKMATE: THE NEW SNOWMOBILE ACCESSORY THAT HELPS YOU GET UNSTUCK

Imagine this: After a fresh snowfall, you decide to meet up with a group of friends to go snowmobiling. Since you all live within a two mile radius, you set the power lines as your rendezvous point before heading out on the trails, agreeing to meet in 30 minutes time. You set out on your sled, cutting through the back field and through a strand of trees. Just as you’re angling around the final bend, you hit a rough patch and before you know it, you’re stuck! When a snowmobile gets stuck it is a common practice to have one or two people pull on your skis while you actuate the throttle. As in the above scenario, if you happen to be riding alone, it is not possible to pull on the ski and operate the throttle by yourself. Stuckmate is a unique snowmobile accessory that allows you to operate the throttle while pulling on the ski – giving you that extra hand when you need it.

It is always recommended to never ride alone but those situations do arise when you are by yourself or with just one other rider. Stuckmate also saves you from digging and packing snow, and lifting the sled, all of which can be extremely strenuous and can cause additional health and safety concerns. In 2014, Canadian entrepreneur and snowmobiling enthusiast, Matthew DesJarlais put his mind to solving this problem. His unique product, Stuckmate, is a snowmobile accessory designed to help snowmobilers get unstuck, by allowing the rider to operate the throttle while pulling on the ski. This handy mechanical device with a handlebar mounted throttle clip connects by a six foot cable to an actuator gun. It weighs less than a pound and rolls up into a nine inch square bag that is kept in the storage compartment of your snowmobile. Stuckmate is easy to use – even if you find yourself alone on the trail, and it comes with a handy instruction manual too.”

“Stuckmate – Here is a product that we bet you’ve never seen. Introducing the Canadian made Stuckmate. This bad-boy is an accessory that allows you to operate your throttle at the same time as pulling on your ski. Now you may be asking, Why? Well you know the easiest way to get a stuck sled out is by pulling on the ski loop while your buddy gently squeezes the throttle on the sled. But what happens if you are alone? Well bring out the Stuckmate. The universal design of the throttle control allows you to attach it to any handle bar and throttle. Then simply walk toward the front of the stuck sled, and as you tug the ski loop, squeeze the trigger on the spring-loaded Stuckmate handle, which in turn squeezes the throttle on the sled. You just got your stuck sled out by yourself. Hero points are big. May we suggest however, that you test it and get used to it before you actually become stuck… For complete details visit www.stuckmate.ca”

“Stuckmate – Snowmobilers are an independent breed. Sometimes they are so independent that when they become stuck in deep snow, there’s nobody around to pull on a ski. This is where Stuckmate comes into play. Stuckmate is a product designed to allow a snowmobiler to do two things at once – work the throttle while pulling on the ski. Its design allows it to work on any snowmobile. It hooks up quickly and simply. And it weighs less than a pound. So if you are part of that independent breed who wants to be able to get yourself out of trouble when nobody else is around, you certainly want to have Stuckmate with your snowmobile. For more information contact www.stuckmate.ca”